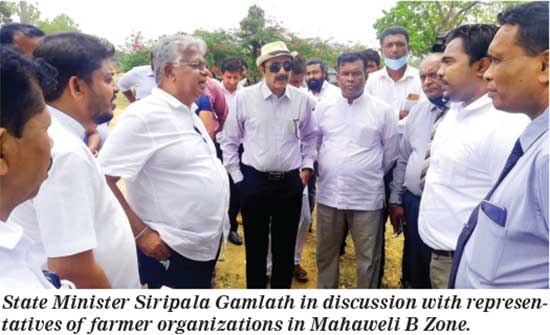 Abandoned lands to be reacquired

State Minister of Mahaweli Zone, Canals, and Settlement Infrastructure Development, Siripala Gamlath, unveiled plans to cultivate 10,000 hectares of maize in Mahaweli Zones under the national food cultivation program ‘Vision of Prosperity’ launched by the President and the Prime Minister.

He said the government has taken a policy decision to suspend the import of non-essential food items. In this backdrop, moves are already underway to grow different varieties of food, including maize for which 10,000 hectares of land have been earmarked in the Mahaweli Zone.

The State Minister was addressing a group of representatives from farmer organizations in Mahaweli B Zone and some investors at a meeting to discuss prevailing issues, in Manampitiya, Polonnaruwa, last week.

“The annual demand for maize in the country is 500,000 metric tons. Of this, 250,000 metric tons are produced locally and my Ministry expects to supply 10% of the demand through the Mahaweli Zone. The balance has to be imported at a cost of Rs. 3 billion”, Gamlath noted.

The State Minister also participated in an inspection tour to review the progress of lands leased to large-scale investors in Welikanda, Aselapura, Ellewewa, Sinhapura and Punani in the Mahaweli B Zone.

During the inspection, it came to light that certain investors had not shown any interest in the projects. It was observed that these investors, who had obtained lands from the government for various agri-business projects, had abandoned them. This resulted in the lands remaining idle for years.

At this juncture, the State Minister directed the Director-General of the Mahaweli Authority, Sunil S. Perera to take over such lands.

He advised the Director-General to introduce a system to utilize the abandoned lands for productive purposes such as leasing them for cultivation to suitable investors or farmers.

The State Minister also noted with appreciation the investors who have fully utilized the lands they had obtained for projects.

Saying that abandoning Mahaweli lands in this manner is a waste of public property, Gamlath instructed the officers to properly scrutinize the projects in advance and allocate lands only to prospective investors in the future.

Mahaweli Authority Director-General Sunil S. Perera said that action has been taken to re-acquire 120 plots of land from a group of investors who failed to embark on viable projects or go in for any development activity so far.

He further said that 50 such blocks of land have already been allocated to different investors to begin development projects.

According to the Mahaweli Authority, 15,000 acres have been leased out to investors, farmer organizations and 806 other individuals for agricultural projects.