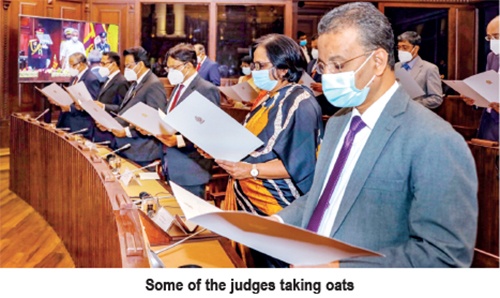 President Gotabaya Rajapaksa, addressing the gathering, pledged to support the independence of the judiciary and ensure its functioning is free of politicization and other forms of interference.

The efficient administration of justice is not only important in terms of upholding the rule of law, it is also vital to the economic development of this nation, President said adding that reliable, efficient and effective dispute resolution through the justice system will foster the nation’s progress.

Judges appointed to the Supreme Court:

Justice Arjuna Obeysekara was sworn in as the President of the Court of Appeal.

Judges appointed to the Court of Appeal

8.Justice S. U. B. Karalliyadde