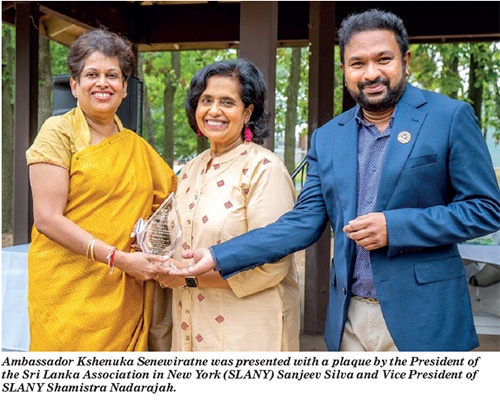 Ambassador Kshenuka Senewiratne was presented with a plaque by the President of the Sri Lanka Association in New York (SLANY) Sanjeev Silva and his wife.

Conforming to rigid health regulations against the coronavirus pandemic, over 75 Sri Lankan expatriates, most of them masked, braved the spreading virus and turned up for the lunch at Medwick Park, Carteret, New Jersey.

Ambassador Senewiratne and her husband arrived in the company of a Police escort vehicle as befits diplomatic protocol.

Attending the farewell were Congressman Frank Pallone of New Jersey who is serving his 16th Full Term in the US House of Representatives representing the sixth Congressional District and former Franklin Councilman Rajiv Prasad – both strong political supporters of Sri Lanka.

Congressman Pallone was instrumental in establishing the first Congressional Caucus on Sri Lanka in October 1998, served as Co-chair for ten consecutive years, and currently serves as an important and most knowledgeable member within the Sri Lanka Caucus in the US Congress.

Both Pallone and Prasad praised Kshenuka for her accomplishments, including being the first SL woman ambassador to the UN.

Dr Wije Kottahachchi, one of the organisers of the farewell and a former president of SLMANA, singled out the Ambassador’s “brilliant diplomatic career and her service to the Sri Lankan community in the tri-state area of New York, New Jersey and Connecticut.”

Among her significant contributions to the Sri Lankan community, he said, was the pandemic response where she set up two hotlines manned by mission staff to assist community needs with four Sri Lankan doctors volunteering their services to the community and facilitated by Ambassador Senewiratne.

In his vote of thanks on behalf of the organizing committee, Vajira Gunawardana, a former President of Royal College Old Boys’ Association East Coast Foundation, thanked the ambassador for her exceptional service to the country, the United Nations, and the Sri Lankan community.

As the first female Sri Lankan ambassador to the UN, he said, “you introduced a new level of sophistication to the office of ambassador. This coupled with your demeanor, humility, and social engagement with the whole spectrum of the community, has brought new respect to the office of the ambassador.”

With the current campaign of gender empowerment at the UN, he said., Ksenuka’s superlative credentials should be an asset when women activists search for the right candidate to be elected the first woman UN Secretary-General next year.