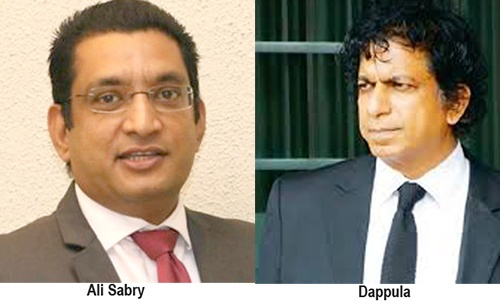 MP Premalal’s parnter in crime not so lucky

Commissioner General of Prisons Thushara Upuldeniya has recently brought to the notice of Justice Ministry Secretary Attorney-at-Law Priyantha Mayadunne, the absence of rules and regulations pertaining to a convicted prisoner being allowed to attend local government sittings.

Upuldeniya, in a letter dated Oct 5, 2020, having pointed out the lapse on their part and sought Justice Secretary’s advice how to handle a request made by Counsel for Kahawatte Pradeshiya Sabha Chairman Mannika Waduge Vajira Darshana Silva, sentenced to death in addition to 47-year prison term over a killing in Kahawatte police area in January 2015.

According to Upuldeniya’s missive, Silva had been remanded at the Welikada prison since July 31, 2020 pending hearing of his appeal against the verdict given by the Ratnapura High Court.

Justice Minister Ali Sabry, PC, told The Island yesterday that the Prisons Chief’s request had been forwarded to the Attorney General.

State Counsel Nishara Jayaratne, who is also the Attorney General’s Coordinating Officer, citing relevant sections of Local Government Statute as well as the Criminal Procedure Code, told The Island that the person concerned was not eligible to take part in local government proceedings whatsoever. She pointed out that the Court of Appeal proceedings had resulted in the suspense of the implementation of death penalty whereas he/she remained disqualified either to participate or vote under any circumstances.

According to the existing laws, a person convicted of murder couldn’t be elected as a member of local government body, participate in proceedings or vote, Jayaratne said.

Legal sources told The Island that Kahawatte PS Chairman Silva had been convicted together with Premalal Jayasekera over the killing of Dodangodage Susil Perera alias Shantha Dodangoda in the run-up to January 8, 2015 presidential election.

In spite of AG’s recommendation, Jayasekera successfully moved the Court of Appeal and was able to take oaths as an MP.

The Ratnapura HC sentenced former Sabaragamuwa Provincial Council member Nilantha Jayakody in addition to Jayasekera and Silva. The then Deputy Minister Jayasekera and a group of persons attacked supporters of common candidate Maithripala Sirisena, while they were engaged in decorating a stage. Sources said that the Attorney General’s opinion as regards Jayasekera and Silva attending Parliament and Pradeshiya Sabha, respectively, similar except in the case of the latter the disqualification is under the local government statute.

Sirisena re-entered parliament from Polonnaruwa on the SLPP ticket at the Aug 2020 general election.

Justice Ministry Secretary Mayadunne told The Island that three committees had been appointed to examine the ways and means of updating existing laws, rules and regulations as part of overall measures to improve the judicial system. Acknowledging the shortcomings pointed out by Commissioner General of Prisons, Mayadunne said that committees headed by Shavindra Fernando, PC (criminal), attorney-at-law K. A. Lasitha Kanuwanaarachchi. (civil) and Kaushalya Nawaratne (commercial) would make recommendations.

Mayadunne explained efforts made by the Justice Ministry to improve and streamline the system.