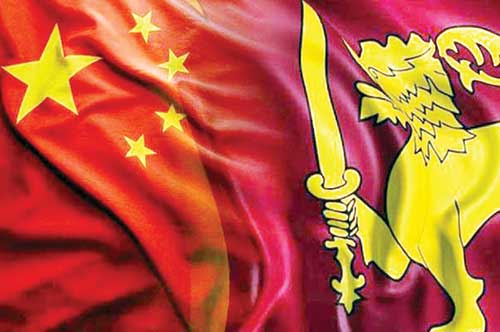 The assurance was given by senior Chinese leader and top foreign policy official Yang Jiechi, who is a member of the Politburo of the Chinese Communist Party and the director of its Central Committee’s Foreign Affairs Commission, the top policy-making body.

The seven-member Chinese delegation led by Jiechi arrived in Colombo, on Thursday night, for meetings with President Gotabaya Rajapaksa and Premier Mahinda Rajapaksa.

Having met President Gotabaya Rajapaksa, at the Presidential Secretariat, the Chinese delegation met Premier Mahinda Rajapaksa at the Temple Trees, where they discussed matters of mutual interest. All major Chinese investment projects were launched during Mahinda Rajapaksa’s presidency.

The UNP objected to the visit of the Chinese delegation, claiming that its members had not undergone quarantine unlike other foreigners. Health Minister Pavitra Wanniarachchi acknowledged that the meetings would take place without following quarantine process.

A statement issued by the President’s Office yesterday evening quoted Jiechi as having assured the Sri Lankan leader that China would continuously back Sri Lanka to achieve development. Jiechi also assured that China would stand by Sri Lanka at the Geneva-based United Nations Human Rights Council (UNHRC) as well as other international platforms.

The visit takes place amidst fresh corona eruption in Sri Lanka while relations between China and the US and China and India are fragile whereas the US seeks to expand its role in Sri Lanka with the finalization of the MCC Compact, having extended ACSA (Acquisition and Cross Servicing Agreement) in Aug 2017.

Declaring that bilateral relations were at an extremely cordial level, the leader of the delegation said that Chinese President Xi Jinping considered further improvement of China-Sri Lanka relations a priority.

The Chinese delegation is on a tour of four countries in the Asian region. Sri Lanka was their first destination. They left Colombo yesterday.

President Rajapaksa recalled continuous Chinese support provided to Sri Lanka regardless of the party in power. The President appreciated the support received by Sri Lanka during the war that was brought to a successful conclusion in May 2009. Declaring that China-Sri Lanka relations had seen further improvement in the post-war period, President Gotabaya Rajapaksa thanked China for backing infrastructure development in the country.

Recollecting he had been to China on 13 occasions before winning the presidency in Nov 2019, President Gotabaya Rajapaksa said that he wanted to achieve Chinese style development especially in Sri Lanka’s rural areas.

President Gotabaya Rajapaksa also requested China to increase the volume of imports from Sri Lanka as the trade balance was very much in favour of China.

The statement quoted President Rajapaksa as having said that the Chinese delegation was asked to allow more Sri Lankan products, more Chinese tourists, explore the possible participation in Colombo tea auctions and invest in a specialized university to promote technology education here.

The delegations agreed to resume talks on a free trade agreement and to fully operationalize the Hambantota Industrial Zone.