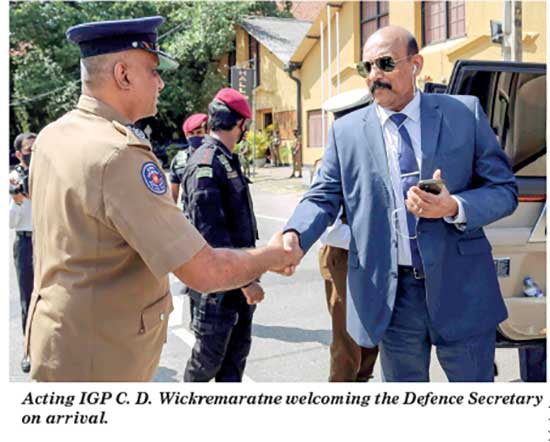 Cautioning government officers resorting to corrupt practices, Defence Secretary Maj. Gen. (Retd) Kamal Gunaratne said the good work done by many dedicated officers in state institutions was obliterated due to a few bad eggs among them.

“Their hard work and dedication are lost,” he said, and added that organized crimes, drug smuggling and extortion had to be curbed while stamping out corruption in state institutions to make the government sector efficient.

The Defence Secretary was addressing a forum of police officers of the Southern province at a session to evaluate the progress in respective police divisions, held at the Hotel-De-Galle in Galle last week.

Necessary measures will be taken to address the grievances faced by police officers, he assured.

The Sri Lanka Police has made tremendous sacrifices and won many commendations for their service but they need to re-think their present status and people’s expectations with regard to the police service in the country, he said.

“People feel safe and protected because of the police service of a country, without which lives, liberty and freedom will be lost. Therefore, the police need to be a corruption-free service to ensure a just and peaceful society,” Gunaratne said.

The Defence Secretary lauded the Police Department for its recent contribution towards conducting a free, fair and peaceful election.

He said President Gotabaya Rajapaksa was elected by the people with the hope of assuring and reinstating the safety and security of Sri Lanka.

“When we mean security, it has many facets and all those put together, it is called national security. The first obligation in ensuring national security is towards providing security from terrorist acts, secondly the possible external aggression and thirdly the security  to keep people safe from natural disasters and calamities, pandemics etc, he explained

Creating a safe and secure society for the people is also a part of national security, he stressed.

He said the public expected police officers to perform their duties free from political interferences.

The Defence Secretary was critical of certain Police Divisions and stations in the Southern province against which allegations have been leveled. “We need to adopt measures and make some adjustments in performing duties and responsibilities by the police to maintain law and order to deliver fair service to the public”.

A new mechanism will be introduced within a few weeks to address and follow-up progress made on public complaints and petitions received against Police Divisions or stations in the respective areas, Gunaratne further said.

“Separate files will be opened for complaints against the respective police divisions or stations and they will be reviewed monthly to evaluate the progress made to investigate them. We will take firm action against OICs of police stations who fail to take measures to resolve the complaints,” he said.

The Southern Expressway has become the main transition route for drug dealings, and it surprising that only traffic police officers could be seen on duties at the entry-exit points, the Defence Secretary noted.