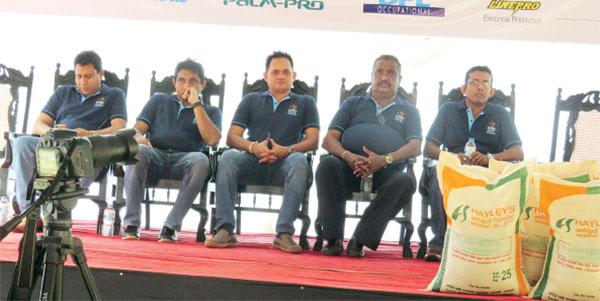 Directors and staff from DPL with fertilizer at the distribution ceremony

By Steve A. Morrell

Dipped Products Ltd ( DPL) through its Firstlight Initiative, over a period of some 12 years, empowered around 3000 rubber farmers in Moneragala to expand their rubber growing initiative to ensure their rubber production is absorbed by the company. It is also significant that the company continues to assist these farmers and their families.

At Moneragala we spoke to these farmers who were enthusiastic about their supplier relationship with the company and continuous good standing with it consequent to supplying raw material, latex and sheet rubber; all of which was readily absorbed by the company.

Grower and rubber farmer Kariyawasam Pathirange Karunadasa, who we met at the fertilizer distribution ceremony in Moneragala, informed us about the impact of DPL on the prosperity of rubber growers. He said he commenced planting rubber in his small tract of land in the late ‘70s. He experienced some ups and downs in this planting venture because at that time prices were not attractive and although he was one of the first to plant rubber in the area he had been considering planting some other crops on his land due to fluctuating fortunes. But he continued with rubber.

However, DPL entered the area and bought sheet rubber as well as latex each day from site. The rubber farmers did not have to journey long distances to sell their raw material. Karunadasa said that because of the impact of DPL and their entry to Moneragala, rubber farmers prospered.

DPL paid good prices for their produce. Although rubber prices were currently low, the company paid extremely fair prices for produce collected. We also discussed the benefits of DPL with a few others as well who informed us of positive impact of DPL on production of rubber in Moneragala.

Additionally, each planter family was assisted with school books for their children and urgent cash for emergencies. Karunadasa also told us he was able to have by – pass surgery because his earnings from rubber were growing.

Karunadasa said payment was prompt and all proceeds were deposited in their bank accounts. He said farmers had full confidence in the services of DPL. He added that each rubber grower earned as much as Rs, 75,000 monthly. In some instances earnings exceeded that amount.

Similar success stories were recorded by us from at least five other rubber growers whom we interviewed.

At Moneragala, Deputy Managing Director, DPL R.H.Pushpika Janadheera said when DPL initiated their support for rubber farmers in Moneragala, the original number of farmers who supplied latex and crepe rubber was only around five. But currently, after about 12 years, the number grew to its current supplier base of over 3000 farmers who supply raw material exclusively to DPL.

He explained that this supplier base grew to its current number because of the integrity of the company in its dealings with rubber growers. The position that DPL was prompt in settling dues of rubber farmers was fully confirmed by these suppliers.

DPL assistance to families, including the provision of school books to children and similar Corporate Social Responsibility projects, further enhanced the reputation of the company.

During wet weather, rubber tapping is usually suspended because of expected damage to tapping panels. Such risks were minimized in Moneragala because of its dry zone character.

Production of rubber in Sri Lanka was only about one percent of world production. Leaders in rubber production in the world, Janadheera said, were Thailand and Indonesia, who each produced about 30 percent of the world’s rubber.

Apart from Moneragala, rubber was also purchased from Hanwella, Kuruwita and Bibile. DPL’s entry to Moneragala was also prompted by the need to encourage the use of fertilizer in small grower plots to increase production.

Fertiliser was issued in our presence to growers at subsidized rates.Janadheera said DPL’s advice to rubber farmers was based on instructions issued by the Rubber Research Institute. He confirmed active participation by Regional Plantation Companies in rubber growing.