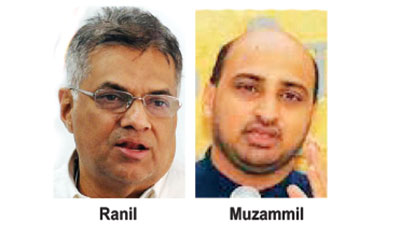 Pointing out UNP Chief Ranil Wickremesinghe, at last quit the party leadership having accepted responsibility for the worst ever defeat suffered under his leadership, Muzammil urged the JVPers to follow Wickremesinghe’s example.

Muzammil who represents the breakaway JVP faction, the National Freedom Front (NFF) has been accommodated on the SLPP National List in terms of the agreement between the two parties.

Addressing the media at the Pita Kotte party office, Muzammil said that the JVP leader and its General Secretary should be ashamed to continue in their positions after the party was reduced to three lawmakers, including one National List member after virtually co-habiting with the previous UNP led regime.

The JVP leader and its General Secretary owed an explanation to those who genuinely loved and respected the party.

Muzammil said that he was among the 39 member strong JVP group in parliament (2004-2010). Having contested on the UPFA ticket, 39 JVPers were elected to parliament; Muzammil recalled adding that in terms of JVP-UPFA agreement, the party received five National List slots. “We gave up two slots willingly as the UPFA faced difficulty in accommodating some of those who had been left out of the original list,” Muzammil said. The incumbent JVP leader and its General Secretary had weakened the party so much it ended up with just three members in parliament.

He said that the parliament was going to meet on August 20 without Ranil Wickremesinghe who had been there since 1977. The former JVPer pointed out that the UNP had finally realized funding sources and international backing were immaterial if the voting public deserted a political party.

Declaring that the UNP had been politically dead, Muzammil pointed out that Sajith Premadasa’s SJB, too, should be seriously concerned as of those 5.5 mn who had voted for Premadasa at the presidential election only 2.8 exercised their franchise at the parliamentary poll.

In the last parliament, the NFF group comprised five members. Of them, Weerakumara Dissanayake a few years ago switched his allegiance to then President Maithripala Sirisena.

Dissanayake failed in his bid to retain his seat on the SLPP ticket.

Muzammil said that in spite of challenges, the NFF certainly did better than at the last general election.

Pointing out that the NFF was deprived of a National List slot at the 2015 general election; the deft debater in Sinhala said that those who had been engaged in trickery learnt an unforgettable lesson in 2020. Serious setback suffered by the Tamil National Alliance (TNA) in the Northern and Eastern regions also proved beyond doubt that the vast majority of people were not interested in communal politics. The political environment was rapidly changing and it would be only a matter of time, destructive elements were eradicated, politically.