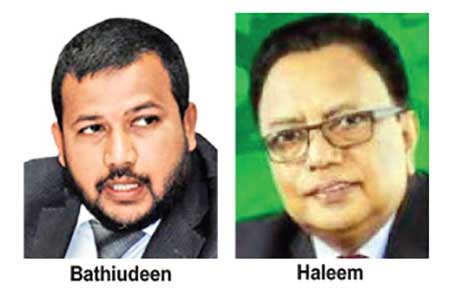 Nilantha Sanjeewa Fonseka, the Grama Niladhari of No 536/A division of the Dehiwala Mount Lavinia MC limit, where Isham’s house is located, revealed that before the PCOI yesterday.

The State Counsel (SC) leading evidence asked the witness if he had to look into a number of persons in his Grama Niladari division in connection with the Easter Sunday attacks.

Fonseka said that he had to help police looking for Muhinuddin Isham Ahamed, who is the son of Mohamed Hanifa Muhinuddin living at No. 213/3, Quarry Road, Dehiwala.

The witness said that the day before the Easter Sunday attacks, Isham had held a meeting with a large number of youth in the area. The witness added that Isham was studying at a private university, and was also working for a private company.

Fonseka said that there was a Thowheed Jamaat mosque near where Isham lived and that the mosque was a hotspot of trouble even before the Easter Sunday attacks.

“Isham also frequented the mosque. After the attack, Isham as well as three other residents of the area, Mohommad Akram Awkam, Wuhari Mohamed Rafiq and Mohommad Akram Sajihar were arrested,” he said.

“Did any politicians come there after Isham was arrested?” the SC asked the witness.

An office assistant of the Dehiwala – Mt. Lavinia MC also testified before the PCOI and said that he had seen Bathiudeen visiting Isham’s house.

Dhammika Priyantha Samarasinghe, the owner of the house where Isham and his family had lived on rent also testified before the Commission yesterday.

Inspector of Police (IP) Samantha Jayamahamudali, who is attached to the Commission’s Investigation Unit, who also gave evidence before the Commission, said he had recorded a statement from Hanifa Muhinuddin and Isham.

In addition, he said that he had obtained a report regarding the official vehicles used by former Minister Bathiudeen, State Minister Buddhika Pathirana, Secretary to the Ministry Ranjith Asoka and Additional Secretary J. M. S. N. Jayasinghe.

Rishvie Habib, the attorney-at-law who represented the former Minister Bathiudeen was given an opportunity by the Commission to cross-examine the witness. Habib said he had sought instructions from his client, who was currently in remand custody.

Accordingly, the Chairman of the Commission directed the Secretary to the Commission to look into the legal possibility of making necessary arrangements.