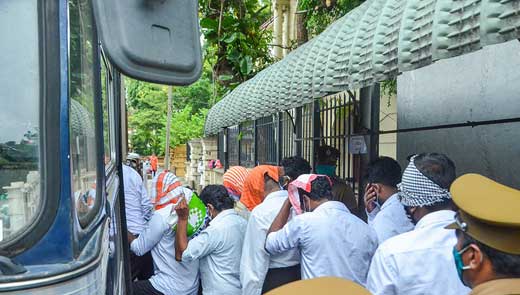 By Saman Gamage and Shamindra Ferdinando

Police investigating clandestine links between the underworld and some law enforcement personnel have taken into custody journalist Prasad Abeywickrema for allegedly facilitating the smuggling of weapons, including Rocket Propelled Grenades (RPGs) and assault rifles from Naula to Colombo during the corona lockdown.

Abeywickrema was taken into custody on Monday (17). Investigations have revealed that the weapons had been moved in a van that carried ‘President’s Media’ name board.

Another journalist is also under investigation in this regard.

Of the weapons pilfered, the elite STF on June 29, 2020 recovered 12 T-56 assault rifles stashed in a multi-storey building at Pitipana in the Homagama police area.

Sources said the STF carried out the raid on information provided by an informant who accompanied Abeywickrema from Naula to Colombo. Sources said that subsequently, the STF handed over the informant to the Criminal Investigation Department (CID) now handling the inquiry.

Responding to The Island queries, sources said that the information regarding the weapons stashed at Pitipana had been received by a Chief Inspector and Sub Inspector attached to the STF who received transfers over a year ago following major narcotic detection. Sources said that the CI and SI had been sent to Mannar and Hambantota, respectively after the controversial detection. They were brought back after Varuna Jayasundera took over the STF recently, sources said, adding that over 80 weapons were yet to be recovered.

Sources said that the entire stock of weapons believed to be the property of the LTTE had been sold to underworld gangs. The weapons recovered at Pitipana had been sold to Kosgoda Tharaka’s gang, while the rest had fallen into hands of others operating in the Colombo district et al.

Several army personnel, including a Commanding Officer of an infantry battalion have been detained in connection with the investigation. The other journalist under investigation is believed to be the go between the military and the underworld.

Sources said that the highest levels of the government had been briefed of the ongoing investigation.

Sources said that some of those under investigation had also been involved in smuggling heroin.

Recently Justice Minister Ali Sabry PC expressed serious concern over the Registrar of courts, the police, the prisons and the Government Analyst Department (GAD) involvement in the heroin trade. Over 20 persons in custody in connection with alleged underworld links include police personnel attached to the Police Narcotics Bureau, GAD workers and Prisons Department employees.

Police headquarters yesterday evening confirmed Abeywickrema’s arrest. It said that the 30-year-old journalist, a resident of Ambakolawewa, Medamulana was taken into custody on Monday around 6.30 pm on information elicited from PNB personnel in custody for dealing in heroin.

The police headquarters also said that information provided by PNB suspects led to the arrest of 49-year-old STF officer who functioned as the OIC, Intelligence and Special Operations of STF base, Mannar. The STF officer had been taken into custody under the Prevention of Terrorism Act (Temporary Provisions) of 1979 No 48.