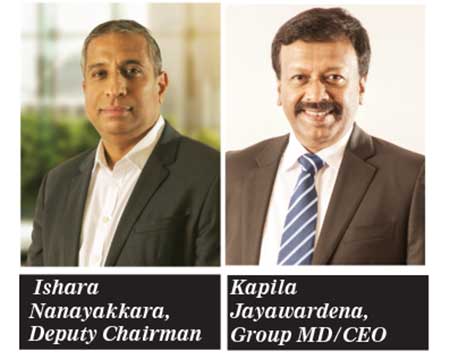 LOLC Group (LOLC), the premier blue chip conglomerate, concluded another financial year on a high note as per the results for the year ended March 31, 2020.

LOLC posted an impressive Rs.19.8 billion Profit after Tax (PAT) for the year in comparison to Rs.19.6 billion PAT in the last year, becoming the most profitable listed entity in Sri Lanka for two consecutive years. In a short span of time, LOLC has truly emerged as a “Sri Lankan global player” having operations in over 10 countries.

While the Group performance was affected by local externalities, such as the Easter Sunday attack, the subdued economic growth and the political instability in FY19/20 that resulted the company to record dips in the net interest income and hikes in impairment charges, LOLC has been able to enjoy its stellar performance largely based on the earnings stemming from its overseas financial operations and the gain on a bargain purchase of Rs. 5.4 billion from the acquisition of the largest sugar production plantation company in Africa. Moving forward, LOLC is well set to realise the financial synergies generated from the PRASAC divestment through realigning the capital position of the Group.

Established 40 years ago, LOLC has spearheaded the Small & Medium Enterprise (SME) lending and microfinance revolution in Sri Lanka and the region. Excelling on a national level, LOLC has now established itself as a leading microfinance institution in the countries which it operates.

With its financial strength and the perfected micro finance business model in the region, the Group is now well-positioned to expand its operations beyond Asia to the African continent where a substantial opportunity lies in serving a large Bottom of the Pyramid population. Overseas expansion has not only offered LOLC diversified revenue streams with increased financial stability, but also has added resilience with a well-spread risk profile.

LOLC already made its debut to Africa by acquiring a microfinance bank in Nigeria in October 2019 and by starting LOLC Finance Zambia as a green field project. In FY 2020/21, LOLC will focus on consolidating its existing businesses while pursuing promising investments in Africa and Asia for long-term value creation.

The Group announced the board’s decision to sell its 70% stake in PRASAC to the South Korean KB Kookmin Bank for a consideration of $603 million in January 2020. LOLC received the relevant regulatory approval in March 2020 and concluded the transaction on April 13, 2020. PRASAC claims $3.3 billion in assets, $2.7 billion in portfolio, $1.8 billion deposits and $133 million Profit before Tax (PBT) for the 12 months ending March 2020.

Despite the sale of PRASAC, LOLC still has a foothold in the fastest growing Southeast Asian country via LOLC Cambodia, the fourth largest Microfinance Institution (MFI) in terms of portfolio size. The company has recorded an impressive performance with a 57% YoY growth of its earnings to conclude the year.

The group owns 97% of LOLC Cambodia that has an asset base surpassing $1 billion, a gross loan portfolio of $857 million, a deposit base of $501 million and a recorded profit of $34.6 million. With its superior process efficiencies and the right product mix, the company now leads the industry in terms of profitability.

Venturing into Myanmar in 2013 as a greenfield operation, LOLC Myanmar Microfinance Company Limited has now become the third largest among the 176 MFIs in the country with an asset base of $109 million, a portfolio of $77.8 million, and a growing deposit book of $13.8 million. LOLC Myanmar has seen an exceptional performance in FY2019/20 with over 94% YoY growth in loan book, total assets and deposits.

In 2017, the Government of Pakistan and the Sultanate of Oman invited LOLC to take up the major shareholding of their joint venture – Pak Oman Microfinance Bank, in recognition of LOLC’s outstanding contribution to the microfinance community. The Group ventured into Indonesia in 2018, acquiring the controlling interest in PT Sarana Sumut Ventura (SSV), expanding its global footprint. SSV is now well-placed to capture the industry potential in a country that has a massive Micro, Small & Medium Enterprises (MSME) market and over 100 million Bottom of the Pyramid population.

Tapping into other neighbouring emerging markets, LOLC invested in the Philippines through LOLC ASKI Finance and LOLC Bank Philippines (a thrift bank) in 2019. These entities collectively account for $11.8 million loan portfolio. In the year under review, the Group made its first finance sector investment in the African region by acquiring a controlling stake of FinaTrust Microfinance Bank in Nigeria, the country with the largest population in Africa.

Today, with the financial sector representation in eight countries along with promising investments in Asia and Africa in the coming years, LOLC has successfully established itself as a strong global financial conglomerate. With this standing, the Group is poised to be a global financial catalyst with a multi-currency, multi-geographic microfinance and SME platform in the future.

In spite of the challenging and unexpected external shocks, LOLC Finance PLC (LOFC) continued to hold its market leadership position amongst the Non-Banking Financial Institutions (NBFIs) in the country with an asset base of Rs.192 billion, a portfolio of Rs.134 billion and deposits of Rs. 99 billion. The company posted Rs. 3.9 billion PAT in the year under review. LOFC as the leading impact lender, holds the largest pool of Development Finance Institutions (DFIs), guiding their respective development goals for Sri Lanka.

The capital and the wide array of technical assistance provided by these DFIs through LOFC have transformed the grass root levels of the economy. Continuing the Group’s legacy of expanding strategic international alliances, LOFC signed a loan agreement with Swedfund, the Swedish Government’s Development Finance Institution to promote financial inclusion and gender equality.

In a statement about the annual performance of the Group, Group Managing Director/CEO Kapila Jayawardena said, “2019/20 has been a difficult year due to externalities affecting most industries, but we are pleased with our strong performance this year, with a Group PAT of Rs. 19.8 billion which is largely contributed by our strategic foreign ventures. With this standing, we are proud to be the most profitable listed entity for the second consecutive year. With a timely global expansion strategy, well diversified revenue streams and a dynamic workforce in place, we will ambitiously look forward to stride ahead with consistent performance during these turbulent times.”