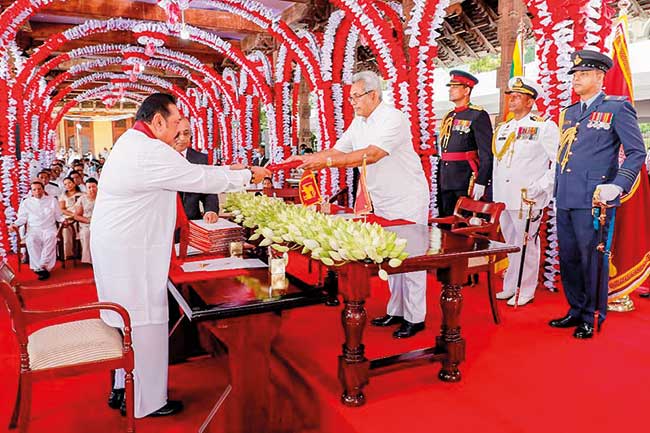 President Gotabaya Rajapaksa, who is also the Commander-in-Chief of the armed forces yesterday (12) took the defence portfolio although the 19th Amendment to the Constitution bars the President from holding any portfolio.

The 19th Amendment enacted in early 2015 repealed Article 44 (2), which enabled the President to hold any number of portfolios.

President Rajapaksa refrained from assuming defence portfolio when he appointed a smaller interim Cabinet last November in the run-up to the Aug 5 parliamentary election.

Prime Minister Mahinda Rajapaksa was among 25 ministers who took oaths before President Gotabaya Rajapaksa at the Magul Maduwa of Dalada Maligawa. In addition to them, 40 received appointments as State Ministers.

The President’s Office on Monday (10) issued a gazette notification with a list of 28 ministries and 40 state ministries.

President Gotabaya Rajapaksa accommodated Sabry in his Cabinet as the Justice Minister.

Chamal Rajapaksa, in addition to being the minister of irrigation, took oaths as State Minister for Internal Security, Home Affairs and Disaster Management. The police come under him. One-time Speaker was the only one to hold both State and cabinet portfolios.

Many an eyebrow was raised when the swearing in ceremony concluded without former President and leader of the SLFP Maithripala Sirisena, who had arrived at the swearing-in ceremony a bit late, not receiving a portfolio. Having contested the general election on the SLPP ticket except Jaffna and Kalutara, the SLFP obtained 13 seats. In addition to the elected, the SLFP secured one National List slot (Dr. Suren Raghavan). The SLFP on its own won one seat in the Jaffna electoral district (Angajan Ramanathan).

In addition to the two Cabinet ministries received by the SLFP, SLFP General Secretary Dayasiri Jayasekera and two others, Duminda Dissanayake and Lasantha Alagiyawanna were sworn in as State Ministers.

Deputy Leader of the NFF Jayantha Samaraweera, who contested from Kalutara on the SLPP ticket was among the State Ministers. Sons of former Prime Ministers, the late Ratnasiri Wickramanayaka and the late D. M. Jayaratne, Vidura and Anuradha, respectively, too, received appointments as State Ministers.

The SLPP won a staggering 145 seats out of 225-member Parliament. The breakaway UNP faction, the Samagi Jana Balavegaya secured 54 seats whereas the UNP, the TNA and the JVP led Jathika Jana Balavegaya won 01, 10 and 03 seats, respectively.

Ex-TID head: IGP, SIS did not allow Jihadist fighter returning from Syria to be arrested

Artificial ‘turmeric’ taken into custody from a grocer at Hunnasgiriya