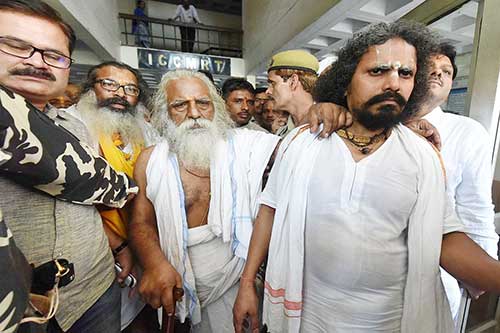 Ram temple trust head has tested positive for novel Coronavirus days after he was present at the ‘bhumi pujan’ ceremony in Ayodhya on August 5.

“We were informed that Maharaj-ji has some fever, so we sent a team of doctors and they investigated and gave medicines . The fever is normal. He has mild breathlessness and we checked his oxygen level. It is saturated. There is nothing serious. We checked for coronavirus, did antigen test and there is positivity,” Sarvagya Ram Mishra, District Magistrate of Mathura was quoted as saying by NDTV.

“The Chief Minister has directed that Maharaj-ji be shifted to the Medanta Hospital and we are getting that done as soon as possible. Maharaj-ji is stable,” he said.

As many as 175 guests were invited for the grand event by the Ram Temple trust, including 135 religious leaders.

The guest list was severely restricted in view of the Coronavirus pandemic.

PM Modi had performed the ‘Shila Pujan’, ‘Bhumi Pujan’ and ‘Karma Shila Pujan’ of the proposed Ram temple in Ayodhya on August 5.

The Prime Minister laid a 40-kg silver brick to symbolise the start of construction of the temple. The silver brick was donated by Mahant Nritya Gopal Das.

A day before, the design of the planned Ram Temple in Ayodhya was released by the trust overseeing its construction.

A series of images showed a grand three-storey stone structure on a raised platform with multiple turrets, pillars and domes. The temple will be 161 feet tall and almost double the size of what was originally planned, according to its architect.

The temple, to be constructed in Nagara style of architecture, will have five domes instead of two as envisaged earlier to accommodate more number of devotees, the architect said.

According to him, the project is likely to be completed in the next three years once the work commences.

Days before the mega event, Acharya Pradeep Das, assistant to the chief priest of the Ram temple, Acharya Satyendra Das, had tested positive for Coronavirus.

Besides, 16 policemen on duty at Ayodhya also tested positive for COVID-19.

Ahead of the ceremony, the Shri Ram Janmabhoomi Teerth Kshetra Trust had appealed to followers of Lord Ram not to rush to Ayodhya for the ‘bhumi pujan’ ceremony of Ram temple construction.

In November last year, the Supreme Court had paved the way for the construction of Ram temple at the disputed site at Ayodhya, and directed the Centre to allot an alternative five-acre plot to the Sunni Waqf Board for building a new mosque at a “prominent” place in the holy town in Uttar Pradesh. – The Statesman

Arctic sea ice is melting faster than ever: Study