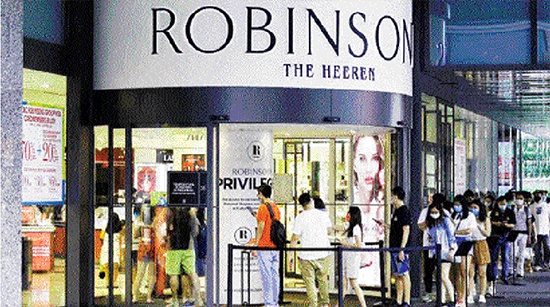 ROBINSONS Singapore, one of the oldest retailers in the Republic with more than a century in business, will close down for good following losses in recent years. But its last two stores at The Heeren and Raffles City Shopping Centre may remain open for a while more for final sales.

The Business Times (BT) on Thursday found that the department store operator had been put under a creditors’ voluntary winding-up.

Robinson & Co (Singapore) confirmed it in a statement on Friday. Its senior general manager, Danny Lim, said: “We regret this outcome today. Despite recent challenges in the industry, the Robinsons team continued to pursue the success of the brand. However, the changing consumer landscape makes it difficult for us to succeed over the long term and the Covid-19 pandemic has further exacerbated our challenges.”

He added that it has been “an honour” for Robinsons to serve the Singapore market and that he was “grateful for the dedication of (the) team, and for the support shown by (its) customers over the years”

Robinsons employees have been informed by management and the provisional liquidators of this news. The company said that employees will be paid in line with the next payment cycle, “well in advance of the usual liquidation process timing which would usually take months”.

The exit puts an end to at least six years of losses that Robinsons has chalked up against declining revenues.

Financial records show that the company made a loss after tax from continuing operations of S$26.5 million in 2014. It sank further into the red up until 2018, when it recorded losses of S$54.4 million. The exception to this was in 2015, when it narrowed its losses to S$17.4 million.

Amid the coronavirus pandemic, Robinsons has shown signs of further strain with the closure of its 85,000 sq ft outlet at Jem shopping mall in May. At the time, it had similarly told BT that competition from the rapid increase in suburban malls had made having multiple, large-scale department stores in Singapore unsustainable “well before” the pandemic surfaced. Even so, “the challenges we are facing with the ongoing Covid-19 situation are extremely difficult and the uncertainty is very unsettling for all”, it added.

Robinsons said its stores in Malaysia, located at Shoppes at Four Seasons Place and The Gardens Mall, will also undergo a similar liquidation process concurrently.

Other department stores could find themselves in Robinsons’ shoes.

In August, Japanese department store operator Isetan Singapore recorded a net loss of S$317,000 for the quarter to June 30, compared with a net profit of S$1.6 million in the same period a year earlier. This was mainly due to a decline in sales as well as impairment losses on financial assets.

It had also warned that the retail environment remains “very challenging” and that a material recovery is not expected in 2020.

Robinson’s Singapore, set up over a century ago in 1858 by John Spicer, an immigrant from Australia and Philip Robinson, a former jail keeper in Singapore, in Commercial Square (now Raffles Place) as Spicer and Robinson, once one of Singapore’s largest retailers. It was apparently to Malayans what Harrods is to Londoners. Spicer left the business in 1859 when it became Robinson and Co.