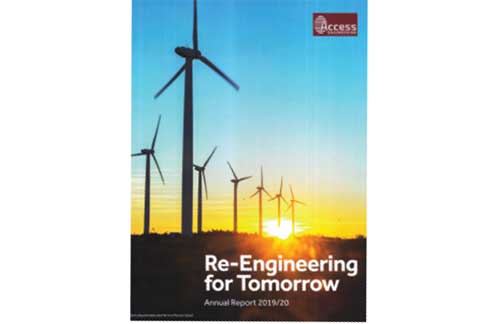 “Despite economic headwinds, we remain optimistic about the immediate future”

Access Engineering PLC, the multi-billion rupee construction company which is by far the country’s biggest quoted engineering firm, recently concluded its annual general meeting covering the year ended Mar. 31, 2020, in which it suffered both a revenue and profit decline as a result of what its chairman, Mr. Sumal Perera, called “one of its most turbulent years” they had faced He attributed the downturn to external pressures including the Easter bomb, political uncertainty ahead of the presidential election and the Covid-related pandemic.

“Despite challenges stemming from the operating context, we remain optimistic about facing the ‘new normal’,” Perera said. “I am proud to say that (we) have faced these unprecedented challenges admirably and remain resilient as a leader in the industry due to our resourcefulness….”

The previous year’s dividend level of 50 cents per share has been maintained on earnings per share of Rs. 0.98 (group) and Rs. 1.93 (company).

Perera said that every year since their listing, they had increased the net value of the company with the year under review being no different with Access’ net asset value running at 21.83 billion at company and Rs. 20.53 billion at group level.

Access which calls itself the most preferred partner in its industry had completed infrastructure projects of national importance and large scale projects both independently and in partnership with international companies. They have also taken steps to expand their core business while diversifying into automobiles and real estate.

He said they had taken tangible steps to build their future as a diversified vertically integrated corporate citizen and will follow strategies to become the most innovative construction company in its sector with a diversified customer proposition and portfolio.

“Thus, despite economic headwinds, we remain optimistic about the immediate future,” Perera declared.

Access MD Christopher Joshua and COO Rohana Fernando said in a joint statement that the future outlook for their business was secure with a full order book, They reported that the construction sector had from Jan. 1, 2020, returned to a preferential corporate tax rate of 14% from the previous 28%. This was expected to have a positive impact on their business.

Their overseas contracts for construction of substructures and related work for five bridges in Kenya, delayed because of Covid, is due to commence in the third quarter of this year, they said.