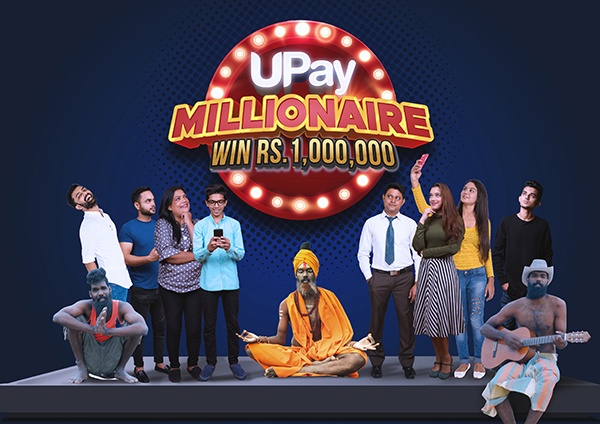 The island’s first interactive game from a digital payment app, UPay Millionaire is all set to create a massive buzz among mobile payment users countrywide!

A first in banking and fintech locally, the gamified contest is an original innovation from leading lifestyle payment app UPay, which is powered by SDB bank. The initiative from UPay – Sri Lanka’s Payment App is an effort at increasing digital engagement islandwide in a fun and interactive way. Contest prizes and daily rewards are tied to the successful completion of a series of exciting daily tasks, together with friends and family.

Starting this month, much excitement has already built around UPay Millionaire’s novel gamification concept and the unbelievable list of cash prizes offered. With a Top Prize of 1 million Rupees, you stand the chance to be a millionaire in just 7 days! A refreshing change, as it can take several months to a year before receiving such a large reward with most other contests.

The other prizes offered are equally appealing, with a total of Five Rs.100,000 winners to be selected, plus a host of attractive daily cash prizes and other gifts to be handed out on 5 days of the contest. And the rules of the game are simple; complete a series of daily tasks as explained on the contest website and win big.

Across 7 days, contestants will be asked to join with friends and family and finish a series of daily tasks to remain eligible and participate. Daily tasks range from inviting a friend to the contest and getting them to download and register for UPay, and tagging friends on specific posts across social media, to recording and uploading fun and engaging videos onto the contest website.

With its simple and interactive style, UPay Millionaire promises a fun-filled gaming environment across a full week. And what’s more, it is the only mobile payment app game in the country with a million-rupee top prize! A game of many firsts, UPay Millionaire is geared to add a new dimension to the mobile and digital payments landscape in Sri Lanka in a revolutionary new way.

Enroll for UPay Millionaire and start playing to win bigger than ever before!